Transferring your precious family VHS tapes to DVD is in very high demand these days. And this is not only true for old VHS tapes but any video tapes used to capture those special family memories from years ago. Video tapes are still stored in big numbers in homes across Australia. Many families have irreplaceable memories stored on those VHS and other tapes. But is it too late to transfer your VHS tapes to digital now?

VHS is short for Video Home System, developed by JVC in or about the 1970s. But it wasn’t until the 1990s that Australian families would extensively adopt the format for recording and viewing videos. VHS was the most popular format in the days’ someone would go to a video store or a video library like Blockbuster to rent the latest films for watching at home.

The Sydney Morning Herald’s Garry Maddox recently wrote, in the early part of the 21st century, it’s believed nearly 90% of Aussie households had a video cassette recorder (VCR). And many homes had 2 or 3 VCR’s to play all sorts of videos at home.

Many family videos, weddings and birthday parties of Australian families used the VHS format. Most homes had a VHS player in the 1990s and early 2000s, so it was easy to share videos with family and friends. That means there are countless homes that have old family movies on VHS. Some of these tapes can be 30 years or older. And they won’t last forever.

Michelle Arrow from the Sydney Morning Herald recently referred to VHS and the home VCR writing in an article, “There’s no back-up copy’: Australian treasures are on the brink of destruction”. This is not only true for Australian families with their own precious family memories, but also a lot of Australian historical content held be the National Archives of Australia.

Some of the largest manufacturers in the world made VHS machines. These were often VHS players, recorders and cameras. These companies included JVC, Sony, Panasonic, Teac and Samsung. And there were even more companies producing VHS tapes with probably the most popular VHS tape manufacturer was BASF.

A Digitising pack from Moving Memories is the perfect gift for someone you love, or a treat for yourself. Don’t let your priceless films, videos or photos sitting somewhere in a dusty drawer. Get them digitised today and you’ll never regret it

When you bring your VHS into our studio for transfer to DVD or digital formats, we will always check the tapes. Your tape’s condition will be evaluated before transfered to digital. We will carefully clean by hand any mould from your tapes. We use a specially formulated isopropanol solution to clean both sides of the tape. special attention is also given to cleaning the hubs and tape mechanisms to ensure the best video and audio quality for your digital transfer.

Many VHS tapes are now aging quickly. And considering some tapes were recorded back in the 1980’s, that means they are more than 30 years old. Over many years, these tapes often suffer from poor storage and tape decay will be evident with picture and sound loss.

A good example of this is shown here in this example. Note the left video is the original VHS video without restoration. The sample on the right is the result of our VHS transfer to digital restoration service . You can see the exact same video sample here with restored picture quality. The digitised video does not jump, with colour and detail restored. The problems shown here with the original video are not always apparent until the transfer is done. But our restoration service shows the results here are quite remarkable.

VHS and many other video or audio tapes can suffer badly from tape decay. This often occurs if you store your tapes poorly. Moisture builds up over many years and mould soon appears. Mould will build up on the surface and on the edges of VHS tapes. This is not surprising because mould finds it’s way on any surface where water or moisture is present. Storing your VHS tapes in a high humidity area will soon bring mould. Note, mould is a living organism. And like any other living thing, mould needs to eat to survive. So the problem with mould on VHS tapes is that it will spread and eat away at the surface of your tapes causing damage to the tape’s picture and sound quality leading the tapes to disintegration. This is common if they stored the tapes for years outside of their case. When you consider some VHS tapes are from the 1990s or even the 1980s, it’s time to clean and transfer your tapes to digital before it’s too late.

An Example of a Mouldy VHS Tape Before and After Cleaning

Note the before and after images below a mouldy VHS-C tape; we cleaned and repaired. There was a lot of white chalky looking mould that you can see on the edges of the tape. After cleaning the tapes by hand, the mould disappears and transferred to a digital format.

To see the before and after example of our tape mould cleaning services, move the vertical line left to right. 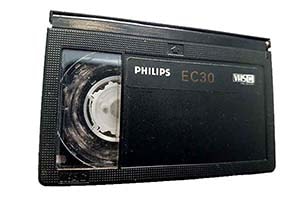 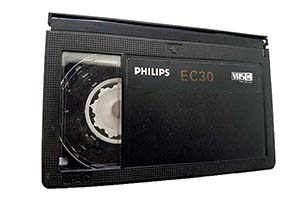 Restoration and repair of VHS tapes is needed when tapes suffer damage when stored incorrectly over a lengthy period. Moisture present in your home means it will invite mold into any area of the house. Even where your precious VHS video tapes are stored. And if you don’t act promptly, your family videos may become lost forever.

We recently had a client present a box of videos with a major problem. Mold was terrible on some tapes. Plus, someone had jammed a few of the tapes in the VHS machines over the years. In desperation, our client attempted a repair job on one tape but it didn’t go well. He pulled apart the shell to fix the crushed tape but he could not reassemble the VHS tape shell again properly. So he called us to see what we could do.

We first dissembled the tapes and removed the spools of tape from the old damaged tape shell. Then we used a brand new shell to fit his tape into. The new VHS shell is clean and free from mold. And because the gears, spools and rollers were new, our client’s tape worked well in its new case. We then cleaned both sides of the tape surfaces plus the tape edges with isopropyl alcohol and ran it slowly through the VHS machine to ensure smooth playback.

We noticed the tape was previously crushed in some portions but our client was lucky that 95% of his family memories were fine. We converted the VHS tape to digital and now he can treasure these irreplaceable memories forever.

Transferring your VHS videos is no longer only confined to the DVD format. DVD players are less popular in homes and even in PC’s today. USB ports are now common on PC’s, laptops, TV’s and even mobile phones these days. So we can transfer your VHS videos to a USB memory stick. These are available in USB2, USB3 and USB-C forms. Your USB memory stick will include files suitable to use on your device. Popular formats are mpeg2 and mpeg4 for video. Mpeg4 (also known as mp4) can be easily uploaded to social media platforms or video platforms like YouTube or Vimeo allowing you to easily share your videos online with family and friends. If you are unsure which format is best, be sure to ask us and we will suggest the most convenient alternative for you. 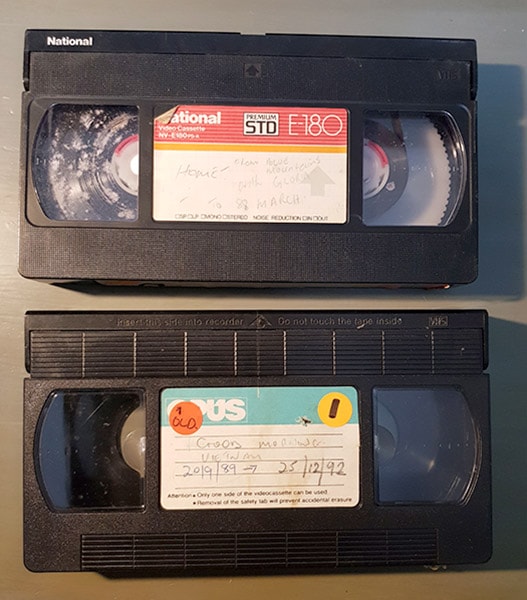 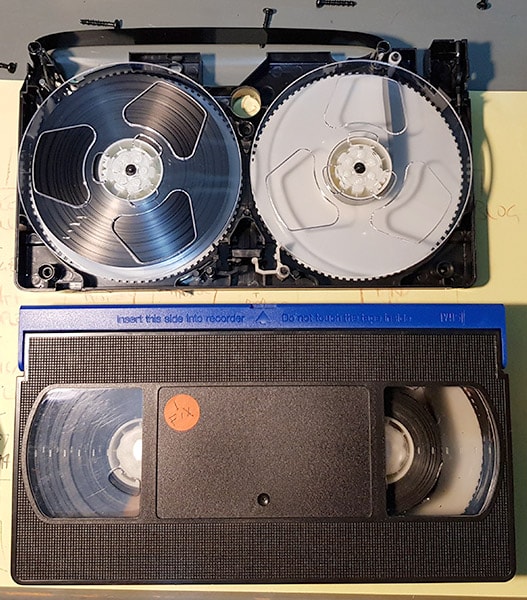 Some of the Formats We Transfer to DVD & USB Memory Sticks

* All logos are the property of their rightful trademark owners

Other Popular Formats We Transfer to DVD & USB Memory Sticks

There are many different formats of tape and film that we can transfer to digital format for you. These include:

Do you have an old iPhone, iPad, Android phone or tablet that have photos or video you’d like to preserve? We can transfer just about any of your files to a DVD or USB too.  This service has been popular with clients that have a phone a few years old that they no longer use. But these phones often have priceless family photos and videos recorded and stored by their phone. We have the software tools and experience to collect your phone data and present them to you on a DVD or USB memory stick, your choice.

When you ask us to transfer your VHS or other videos to digital media there are many options available to you. These include:

Your videos are recorder to a DVD-R disc. These discs can be played in most DVD stand alone players and DVD rives in PC’s, for example.

We can transfer your videos to your own USB portable hard disc drive. This is a good solution that’s quick and portable, however these hard drives can be very fragile and damaged easily if dropped so we always recommend you backup your videos to USB memory sticks too.

We can upload your video transfers to a private YouTube channel. The big advantage of doing this is that the links can easily be shared with all your friends and family anywhere in the world with an internet connection. We do recommend however that you still have a copy on USB memory sicks as a back up. Ask us about how we can create a private channel for you.

A Digitising pack from Moving Memories is the perfect gift for someone you love, or a treat for yourself. Don’t let your priceless films, videos or photos sitting somewhere in a dusty drawer. Get them digitised today and you’ll never regret it

Contact Us To Get Your Tapes Transferred to Digital Now!

If you have VHS tapes or any other video or audio tapes or films that you need transferred, why not contact or call us today to get a quote? All we need to know is how many tapes you have and their approximate length. We can then give you an estimate for your job. You can drop into our studio or we can arrange our courier to pick up your tapes. Delivery is a flat $15 Australia wide. Plus, we will guarantee results.

You can drop in to our studio or send us your tapes. More details are available here.

Sending Your Tapes to Us
Page load link
Go to Top